I joined the force in 1976 when female officers were known as Women Police Constables (WPCs). It was a completely different era Life on Mars was quite accurate. Although WPCs were allowed on section, which was a fairly new way of working, we were still tasked with dealing with ‘women’s issues’, which involved dealing with any female or child victims. There were very few women in the force, in fact it was a rarity to have one on each section and when I joined I was the only woman on my intake.

WPCs had to wear skirts; there were no trousers, a box style hat, double breasted jacket and a cape, which didn’t keep you warm or dry at all. It was quite different from the heavy kit officers have to carry around today. Female officers were also given a long handled handbag to carry their small custom made truncheons.

I remember it being said ‘it would probably be best to keep it in the handbag and swing the handbag if you needed protection, the only use the truncheon would be for is breaking windows.’ The men were given much longer and more suitable truncheons.

During the 80s it was a period of unrest with various protests taking place across the country which Beds officers were seconded to, from the Greenham Common nuclear weapons protests, to animal rights, poll tax riots and the miner’s strikes. Women did not form part of the Police Support Units in those days, so it was our responsibility to maintain business as usual in force in the absence of our male colleagues.

I carried out a number of different duties such as a control room operator, panda driver, a beat officer, victim liaison and school liaison officer, where I received a number of commendations and congratulations, before being promoted in 1988 to a Sergeant. This made the local newspapers as it was such big news a female being promoted to that level. One of my other greatest achievements was climbing Snowdon and carrying an MS sufferer up to the top of the highest mountain in Wales with a team from Beds Police to help to raise valuable funds for the Multiple Sclerosis (MS) Therapy Centre in Barkers Lane, Bedford, to be built.

I have also seen a huge change in technology over the decades, the most significant being a move to digitalisation. I have still got my Police Handbook and Regulations, which were produced using a typewriter; you can feel the bumps on the page. It is unbelievable to think of the amount of time it must have taken to type out each one. The other major change has been in the devices used by officers. When I started we were provided with a two piece PYE radio, with an aerial that looked more like a thin knitting needle, where you spoke into one part and listened with the other. You had to be really careful to remember to take both parts with you. There was one instance when I waded in on a fight in Lime Street in Bedford with only one part of my radio on me; the other was in the car. Thankfully a police van was passing and realised I needed back up.

In 1991 an opportunity arose to be a Project Officer in the Computer Department. I played a key role in the  design, development testing and implementation of what was a £1million project to develop our first prosecution and custody system with links to the LIBRA courts system, as well as the introduction of the first handheld SL400 breathalyser kit, the Lion 6000 Intoxilizer machine and the LIBIS drink drive  automated  breathalyser  procedures. This was a massive project with many hours of negotiation, program developing and testing which was a great success. The Force had moved into the world of technology.

I was able to develop my skills and knowledge and in 2000 I completed my degree at De Montfort University Milton Keynes gaining a Bachelor of Science Honours in Computer Science. On conclusion of the project I was posted back to Greyfriars and took on the role of a Custody Sergeant, which I was quite adept at having developed and implemented the computerisation of the department.

Unfortunately I had an accident in custody, which left me with a ruptured cruciate ligament and torn cartilage. I was put on restricted duties, but I was still full of enthusiasm, despite having to give up the many sports I played and represented the force in such as swimming, cross country and badminton. I moved into the world of crime auditing, to ensure crimes were being allocated, recorded and investigated properly and supervised the burglary unit at the same time.

In 2007  I  made a decision  that  having  completed more than 31 years  of  service, this was the  optimum time for  me  to retire as  a  police officer. But as they say as one door closes, another one opens. Before it was official, I had been approached from more than one source, which showed an interest in utilising my skills and I was offered a position with the Criminal Justice and Custody Department as a Performance and Compliance Officer.

One of my roles was to develop a process in custody to ensure the welfare and dignity of detainees was preserved and a pre-release risk assessment was carried out.  I developed a product which allowed  key  questions  to be  inputted  on the custody system about the dignity and risk on a detainee’s initial detention, as well as on  their pre-release, accompanied with a document  with key  agencies details  if they  needed  any follow up support.

Following an HMIC/HMIP inspection in 2010 it was noted these should be rolled out nationwide as ‘best practice’ and in recognition of this I was awarded a Chief Constable Commendation for professionalism.

I am now a Policy and Performance Officer with the collaborated Criminal Justice department, where I ensure case files and Crown Prosecution Service processes are streamlined. Looking back over the last 40 years I feel I have accomplished a lot and have no regrets. It is not known what the future will bring, and I have often been asked ‘when are you going’ or ‘is it not time for you to retire’. To this day I have not been able to answer this and just smile. 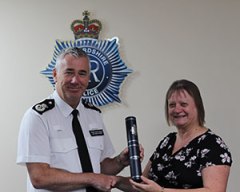 One of Bedfordshire Police’s longest serving staff members Carol Farmer has recently received a Long Service Award in recognition of her loyal and dedicated service over the last 40 years. 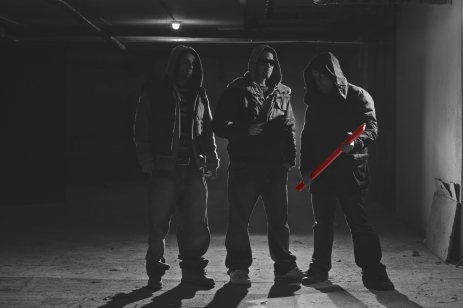 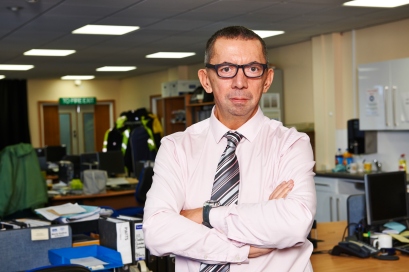 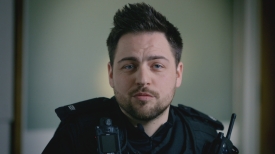