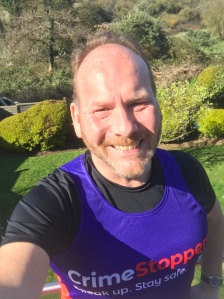 I grew up in London and had always intended to run the London Marathon, but life happened; I moved out of the city, joined the army, and then the police service. I’ve watched it year after year and have always thought it would be an exciting event to take part in.

I lost my dad a couple of years ago. He was a PC who patrolled beats along some of the marathon route, so there is also a sentimental reason for me wanting to take part.

Running is a great opportunity to clear your head and take some time to do something for yourself. I try to keep a base level of fitness which is why I run, but especially with our jobs as police officers and staff it’s important we take care of our physical and mental health, and running helps many people with that. Park Runs are a good way for people to get involved, and I take part in those and I’m incredibly grateful for all the people who work so hard to organise those events. I am currently working with local Rotary Clubs to organise a mass participation ‘Santa Run’ in Northampton in December.

I am running to raise money for Crimestoppers, who are an independent charity working with both the police and the public. They provide an invaluable service that gives people an opportunity to speak up and stop crime. Some people may be a victim of crime or may have information about criminality, but are not able to report it, or are fearful to speak up. The charity gives them a voice.

Crimestoppers offers so much support for victims and witnesses of crime, but is also doing vital work to help the police keep the public safe. They are a national charity who provide anonymity for people across the country to share information. This includes information about relatively low level incidents which nevertheless cause harm, fear or concern, through calls or messages that provide that one piece of key information that is really critical in a major investigation.

But at the same time they are fiercely independent and guard the anonymity of anyone who gives them information. Their first duty is to give a voice to those people who can’t speak up, and re-route the information on to the people who can help.

As a police officer I really value the work that they do.

The London Marathon is relatively early in the marathon season. Normally I wouldn’t start running properly until the spring or summer, but I’ve been training in the winter, and I have to say it’s been hard. I’ve run in the freezing cold, in the wind and in the rain, and once I was about 25k into a run and it started to hail.

The London Marathon is a huge event, and I’m really grateful to all the police officers and PCSOs who help to manage it, as well as everything else they are dealing with in the capital city.

I think it will be a great day. The event draws people from all over the world and it’s going to be a real carnival atmosphere with people cheering the runners all the way around. I will need that support – I know it’s going to be painful, as I’ve recently injured my hip and my knee but the cheers will spur me on. And of course London is a beautiful city to run through.

For me it’s about enjoying the event and soaking up the atmosphere – I will crawl over the finish line if I have to!

I will do my best to raise as much as I can for Crimestoppers and make the charity proud. It’s a privilege to run for them.

To find out more about Crimestoppers, visit their website. You can also donate to ACC Colbourne’s Justgiving page.