PC Esther Carroll joined Bedfordshire Police in 2002 and has committed her policing career to protecting vulnerable victims of domestic abuse, honour based violence, forced marriage and female genital mutilation. She has received two Chief Constable’s Commendations for her Forced Marriage investigations and a ‘True Honour’ award by the Iranian and Kurdish Women’s Right Organisation.

Esther is retiring this month and she took some time to reflect on her incredible career and contribution to the force.

Before I joined the police I tried a number of career paths, Although they weren’t what I was looking for in my life, the experience definitely helped me with being the best police officer I can be. END_OF_DOCUMENT_TOKEN_TO_BE_REPLACED

I didn’t realise it was as bad as it was

Not until I was out

END_OF_DOCUMENT_TOKEN_TO_BE_REPLACED

Today, 31 August, marks the first year that we cannot celebrate Atul’s birthday, which he shared with his daughter, in person. Instead we send white balloons of peace to him.

Atul was special to us all in every way, and would never harm anyone.

He would always see the good in people; he was a good, honest, caring and very loving man who worked most of his life. He never judged anyone. END_OF_DOCUMENT_TOKEN_TO_BE_REPLACED 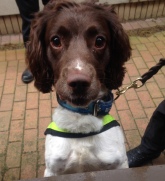